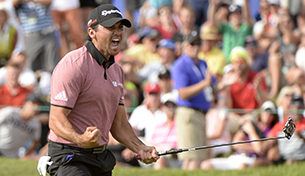 OAKVILLE, Ont. – Golf Canada and RBC are pleased to announce the final field of competitors vying for the US$5.9 million purse at the 2016 RBC Canadian Open, July 18-24 at Glen Abbey Golf Club in Oakville, Ont.

“The field is nearly set and we’re ready to tee-up the 107th playing of Canada’s National Open Championship starting next week at Glen Abbey Golf Club,” said Tournament Director Brent McLaughlin. “We’ve got a tremendous mix of international stars and Canadian talents ready to compete and a family-friendly festival experience ready to welcome spectators of all ages to the 2016 RBC Canadian Open.”

In total, 156 players will compete for the US$5.9 million purse next week in Oakville when Canada’s National Open Championship returns to Glen Abbey for a record 28th time.

Defending champion Jason Day will be joined by six other former champions, including Team RBC members Brandt Snedeker – who won in 2013 at Glen Abbey Golf Club – and Jim Furyk who claimed back-to-back championships in 2006 and 2007. Other confirmed past champions include Sean O’Hair (2011), Carl Pettersson (2010), Chez Reavie (2008) and Vijay Singh (2004).

Olympians in the Field…

David Hearn of Brantford, Ont., who held the 54-hole lead in 2015 before finishing third will lead the 12-member Canadian contingent that also includes Graham DeLaet of Weyburn, Sask., Abbotsford, B.C., natives Adam Hadwin and Nick Taylor, along with Canadian Golf Hall of Fame member Mike Weir of Bright’s Grove, Ont., who will be making his 25th start in Canada’s National Men’s Open Championship.

The Canadians in the field have their sights set on becoming the first Canadian to capture the national title since Pat Fletcher claimed victory in 1954.

Final Tournament Exemptions to be Named…

The top three players on the Mackenzie Tour-PGA Tour Canada Order of Merit following this weekend’s Staal Foundation Open presented by Tbaytel in Thunder Bay, Ont., will earn exemptions into the field for the 2016 RBC Canadian Open.

The final four exemptions into the field for the 2016 RBC Canadian Open will be handed out at the Monday Final Qualifier on July 18 to be played at Diamondback Golf Club in Richmond Hill, Ont.

The 2016 Olympic golf team comprised of David Hearn and Graham DeLaet along with Brooke Henderson of Smiths Falls, Ont., and Alena Sharp of Hamilton will be officially welcomed by the Canadian Olympic Committee to Team Canada during a FREE public celebration at Glen Abbey on Tuesday, July 19 at 11 a.m. ET. The men’s team will compete from August 11-14, while the women’s team will take to the Campo Olimpico de Golf course in Rio de Janeiro from August 17-20.

In addition, Friday, July 22 will once again be Red and White Day at the RBC Canadian Open. Players and spectators are encouraged to wear Canada’s national colours in support of our Canadian hopefuls in the field challenging for Canada’s National Open Championship.

Grounds tickets for all days of the 2016 RBC Canadian Open, as well as a limited number of premium ticket packages are still available. A full list of ticket packages and pricing is available online at www.rbccanadianopen.com. Golf Canada and RBC are also pleased to offer FREE admission to juniors 17-and-under – click here to download a FREE Junior Pass.

The full list of competitors competing in the 2016 RBC Canadian Open can be found here.