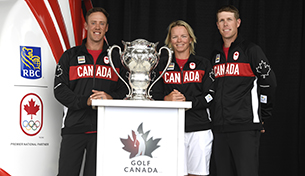 OAKVILLE, Ont. — On Tuesday, the Canadian Olympic Committee (COC) and Golf Canada named the four athletes nominated to represent Team Canada in golf at the Rio 2016 Olympic Games from August 5 to 21.

The four athletes selected are: Graham DeLaet and David Hearn in the men’s event as well as Brooke Henderson and Alena Sharp in the women’s event. The men’s team will be coached by Derek Ingram while Tristan Mullally will coach the women’s team.

The athletes earned their spots on the Canadian Olympic Golf Team based on their standing in the respective men’s and women’s world golf rankings as of July 11, 2016.

The field for the 2016 Olympic golf competition will include 60 women and 60 men competing over 72 holes of stroke play in a men’s individual event (August 11-14) and a women’s individual event (August 17-20). Golf makes a historic return to the Olympic Games for the first time in 112 years, dating back to when Canadian George S. Lyon won gold for Canada at St. Louis 1904.

At Rio 2016, Canada expects to field a team of approximately 315 athletes.