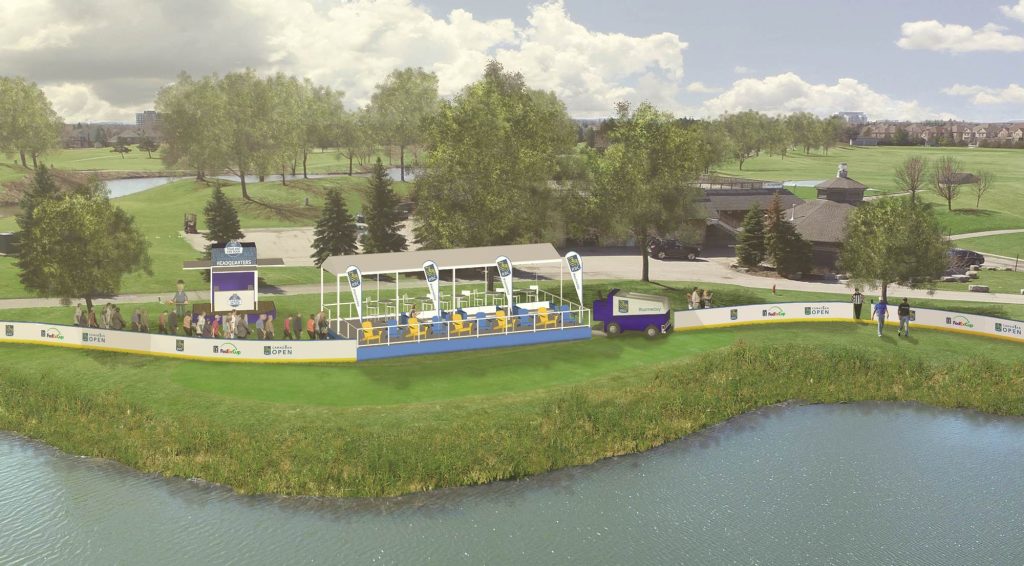 OAKVILLE, ONT. (Golf Canada) – To help celebrate Canada’s 150th anniversary, Golf Canada and RBC have announced the launch of The Rink – a fan experience taking place during the 2017 RBC Canadian Open that will combine Canada’s most popular pastimes, golf and hockey.

During championship week, July 24-30, the par-3 7th hole at Glen Abbey Golf Club in Oakville, Ont., will transform into a rink-styled fan experience, complete with hockey boards, an ice-resurfacing machine, as well as the addition of new rink-side bleachers and viewing decks.

“We’re very excited to bring The Rink to life,” said RBC Canadian Open Tournament Director Brent McLaughlin. “We wanted to create an experience that oozed Canadiana. We know Canadians love hockey, and of course they love golf too. Combining rinks and links was a no-brainer.”

To add to The Rink experience, volunteer marshals on the hole will be outfitted in referee uniforms, while rink boards will outline the hole from tee to green, replacing traditional roping.

Seating for The Rink is adjacent to the Coors Light 19th Hole Beer Garden. In-seat service and giveaways will be available to ensure fans don’t miss out on the action. A $1,000 donation to Ronald McDonald House Charities Canada will be made for every birdie made on the hole during championship play, Thursday to Sunday.

Global TV will also have their broadcast booth behind the green looking back at the tee, enabling television viewers the opportunity to witness The Rink from the comfort of their own homes.

“The RBC Canadian Open has always been uniquely Canadian,” added Matt McGlynn, vice-president, brand marketing for RBC. “We felt integrating ‘The Rink’ into our Canadian-themed activation would be a perfect extension to the fan experience. We’re proud to support Golf Canada and make this Canadian tribute a reality, hopefully for many years to come.”

There is perhaps no better way to show your Canadian pride than by cheering on homegrown Canadian talent – and Canada’s top golfers are giving fans lots of reasons to cheer. The 2017 edition of the RBC Canadian Open will be a showcase of the incredible Canadian talent on the PGA Tour.

Graham DeLaet is hungry for his first PGA TOUR victory, recently recording his fifth Top 10 of the season – a tie for 10th at The Memorial.

The deep contingent of Canadian talent continues with the likes of Nick Taylor. The PGA TOUR winner (2014 Sanderson Farms Championship) has three Top-10 finishes this year and would love to notch another win this year at Glen Abbey.

David Hearn nearly tasted victory at the 2015 RBC Canadian Open. With a massive crowd cheering him on as they sang “O Canada,” Hearn held the lead heading into the final round at Glen Abbey. However, he would fall short, finishing third behind electric Australian Jason Day.

Perennial fan favourite and Masters champion Mike Weir will also be teeing-it-up at the RBC Canadian Open ahead of his debut as assistant captain at The Presidents Cup.

The RBC Canadian Open is more than just 72 holes of world-class golf – it’s one of Canada’s most prolific sporting events, chocked-full of activities for spectators both inside and outside the ropes.

In addition to The Rink and outstanding golf, other fan activities adding to the RBC Canadian Open experience include:

RBC Canadian Open 5K Run – Saturday July 22
Landmark Sport Group in conjunction with Golf Canada will once again be putting on the RBC Canadian Open 5K Golf Run. On Saturday, July 22, 2017 the second annual RBC Canadian Open 5K Running Event will provide participants the opportunity to run or walk along the spectator and cart pathways of Glen Abbey Golf Club. The route begins near the 1st tee of the Championship Course and finishes alongside the iconic and picturesque 18th green. This event is ideal for traditional and non-traditional running audiences. All participants will receive a bib, shirt and finisher’s medal. Registration is $60 and all participants receive a free Anyday ticket to enjoy the championship. www.golfrun.ca

Hall of Fame Induction & Official Opening Ceremony – Tuesday July 25
On Tuesday, July 25 at 10 a.m. our Opening Ceremony will officially kick off the RBC Canadian Open and include the Canadian Hall of Fame induction of amateur golf titan Judy Darling Evans and legendary golf club maker Bob Vokey. The ceremony, which is free to the public, will conclude with the singing of the national anthem.

Red & White Day – Friday, July 28
The RBC Canadian Open is Canada’s National Championship and to celebrate ‘Our Open’, Friday, July 28 of tournament week will once again be ‘Red & White Day’. Spectators, sponsors, players and attendees are encouraged to wear Canada’s national colours in support of our Canadian golfers in the field.