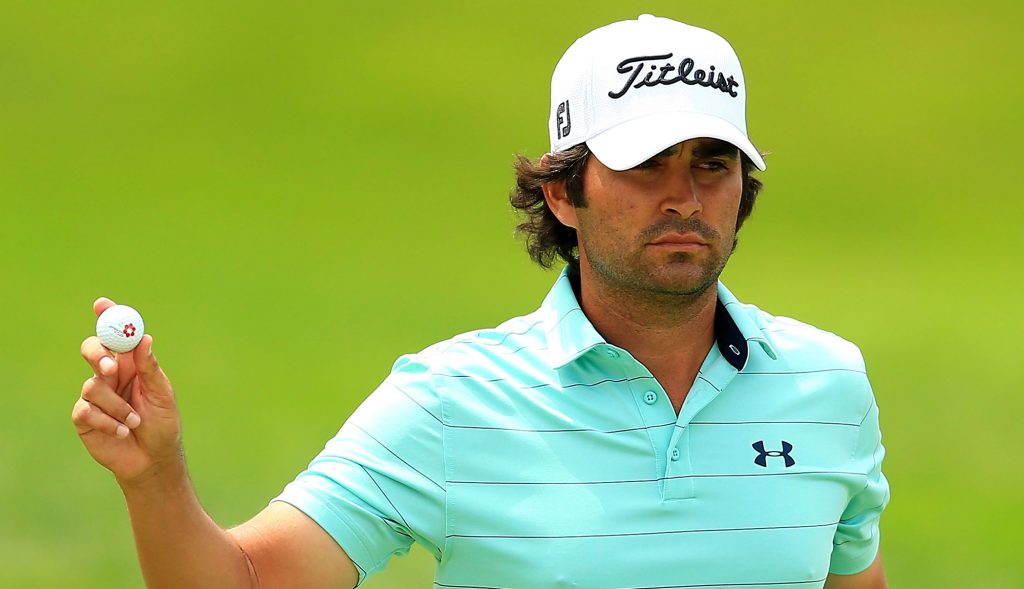 OAKVILLE, ON - JULY 28: Martin Flores of the United States reacts to his putt on the seventh hole during the second round of the RBC Canadian Open at Glen Abbey Golf Club on July 28, 2017 in Oakville, Canada. (Photo by Vaughn Ridley/Getty Images)
RBC Canadian Open

Fort Worth, Tex., product Martin Flores fired a 66 for the second consecutive day at Glen Abbey Golf Club to move to 12-under-par and take the 36-hole lead at the RBC Canadian Open.

Flores was bogey-free on Friday with four birdies and an eagle on the par-5 second hole to build a one-shot advantage over Matt Every, Gary Woodland and Brandon Hagy, who are 11 under.

“I was really pleased with my day,” said Flores. “Starting on the back, I sprinkled in some birdies and was able to capitalize on 16 and 18 – two par 5s.”

The 35-year-old is looking for his first career PGA TOUR victory this weekend.

Every—one of five players who shared the opening-round lead at 7 under par—posted a 4-under-par 68 in the second round to climb to 11 under par.

A two-time PGA TOUR winner, the Daytona Beach, Fla., native is happy to be in contention heading into the weekend.

“I definitely feel like I’ve made big strides the last few months, because it sucks to suck,” said Every. “I’m playing well right now. It’s not like a surprise to me. But I feel good with where I’m at.”

Hagy, a Santa Monica, Calif., native, had seven birdies on Friday to put himself in position to chase his first career PGA TOUR win this weekend.

The lowest score of the day belonged to Woodland. Hailing from Topeka, Kans., Woodland fired a 9-under-par 63, matching his career low round on the PGA TOUR—one shot away from tying the course record.

“Today I drove it well. Obviously, the ball-striking was good and I saw some putts go in,” said Woodland. “That adds up to a pretty good number.”

Graham DeLaet and Mackenzie Hughes were the lone Canadians to survive the 36 hole cut at Glen Abbey. The pair sit at 8 under par and hold a share of 14th.

DeLaet carded a 4-under-par 68 for the second consecutive day.

“I know the crowds will probably be big tomorrow and fun, and I need to try to embrace that,” said DeLaet. “I’m within striking distance, so another solid round tomorrow or something really low, I think I’m going to need two really good ones or like one really special one to get the win.”

The Weyburn, Sask., native had his best RBC Canadian Open finish in 2014, where he tied for 7th.

“I’m in the mix, and I’m excited about it.” – Graham DeLaet after carding a 68 to get to 8-under at the #RBCCO. pic.twitter.com/J7IPVudosy

Already a winner in his rookie season on the PGA TOUR, Hughes started the day in a tie for 17th at 5 under par. The Dundas, Ont., native poured in seven birdies in round two, but added four bogeys to card a 3-under-par 69.

“You’re going to have those kind of rounds. I did well to manage it,” said Hughes. “It was kind of tricky out there. The winds were kind of swirling and a little bit gusty at times. So, 3 under was a good score.”

Three-time major champion Vijay Singh made a move up the leaderboard on Friday. The Fijian carded a 4-under par 66 to move into a tie for fifth two shots back of Flores at 10-under par.

Singh, 54, passed on playing in the Senior Open Championship this weekend to return to the site of his 2004 victory over Canadian Golf Hall of Fame member and Brights Grove, Ont., native Mike Weir.

“I know the golf course. The people are very friendly and they know golf,” said Singh. “I’ve played here so many times. Very, very familiar with it.”

Defending champion Jhonattan Vegas is part of a group of four players at 9 under par. The Venezuelan doesn’t plan on changing his game plan on the weekend as he tries to repeat.

“I was playing with Dustin (Johnson) today, which was a good thing because we were both firing at everything,” said Vegas. “You have to stay aggressive out here, because these guys are making a lot of birdies.”

Tee times for the third round can be found here.

CANADIANS AT THE 2017 RBC CANADIAN OPEN