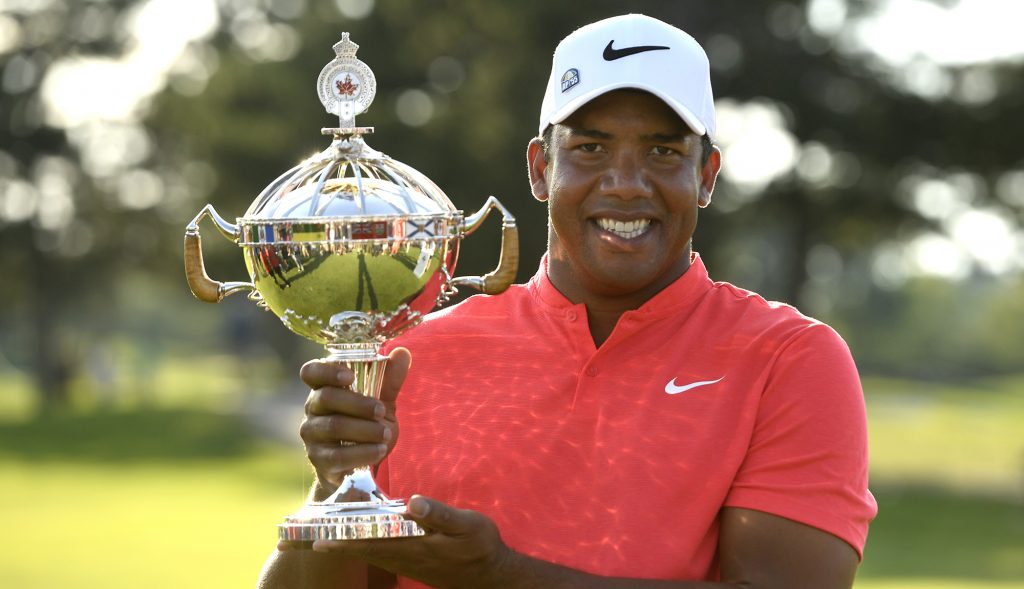 The Venezuelan made a birdie on the first playoff hole, the par-5 18th, to become the seventh RBC Canadian Open winner to successfully defend his title.

“Obviously repeating is a big thing for the confidence,” said Vegas. “Obviously I want to win more and bigger tournaments, and this is a great step forward.”

Vegas recorded his lowest round of the championship, firing a 7-under-par 65 in Sunday’s final round with just one bogey on the par-3 15th.

Coming into the week, Vegas had missed five consecutive cuts.

“Obviously after coming after five missed cuts is never positive,” said Vegas. But I’ve been playing good golf the whole year; that I just had to stay cool and hopefully things will turn around, and I’m glad they did.”

This is the fifth time Hoffman has failed to convert a 54-hole lead into a victory.

“Yeah, it’s always tough after you don’t close the deal after having the lead but obviously got some big tournaments coming up,” said Hoffman. “The playoffs, a major championship, and obviously got some good momentum going into those.”

Hoffman’s previous best finish at the RBC Canadian Open was a T4 at St. Georges Golf and Country Club in 2010.

Englishman Ian Poulter charged up the leaderboard Sunday, carding an 8-under-par 64 to finish third at 20 under par in his first RBC Canadian Open appearance.

After a tumultuous start to his season in which he nearly lost his PGA TOUR card, Poulter now has two top-5 finishes in 2017.

“I’ve done everything I needed to do today. I played very solid. I gave myself lots of opportunities,” said Poulter after his round. “I’ve had a nice summer in Europe with the family and kids. Life’s all good.”

Gary Woodland of Topeka, Kans., finished fourth at 19 under par – his fifth top-10 of the season and best-ever finish at the RBC Canadian Open.

Dundas, Ont., native Mackenzie Hughes won the Rivermead Trophy as the low Canadian, finishing in a tie for 32nd at 10 under par in his first RBC Canadian Open as a professional.

Hughes finished strong with a 4-under-par 68 on Sunday to climb 23 spots after struggling with a 2 over par 74 in the third round.

“The week as a whole was a lot of fun,” said Hughes. “So many people out supporting me from Dundas and all over Canada. I could feel that support all the way around. All the Canadian fans
listening, thank you for the support.”

Graham DeLaet from Weyburn, Sask., finished T48 at 8 under par, closing with a 1-under-par 71 on Sunday.

World No. 1 Dustin Johnson tried to make a charge after starting the day five shots back of Hoffman at 12 under par. He finished with a 5-under-par 67, ending tied for fifth with Tony Finau (Lehi, Utah) and Robert Garrigus (Scottsdale, Ariz.)

“The golf game is moving in the right direction,” said Johnson. “I felt like I played really good every day this week. I hit really good putts. They just weren’t going in the hole.”

Click here to view the full leaderboard for the 2017 RBC Canadian Open.