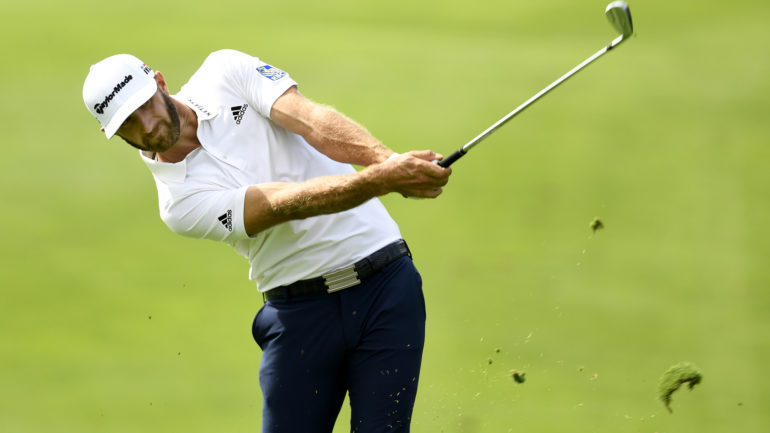 OAKVILLE, Ont. – World no. 1 Dustin Johnson took Glen Abbey by storm Saturday, rocketing up the leaderboard for a share of top spot at 17-under following a third-round  7-under 65. Also sharing top-position at 17-under are second-round leader Kevin Tway who carded a 4-under 68, as well as the South Korean duo of Byeong Hun An and Whee Kim, who shot 66 and 67 respectively to head into Sunday tied with Johnson atop the leaderboard.

Johnson was off to the races early Saturday, birdying five of the first six holes, before dropping two shots with bogeys at Nos. 10 and 13. He would finish in force with a birdie, birdie, eagle stretch at 14, 15 and 16.

“Yeah, I mean, definitely got off to really nice start and made a couple good par saves in there, too,” said Johnson, an 18-time PGA TOUR winner and member of Team RBC. “I feel like my game is in really good form. There’s a lot of guys that are right around the lead and somebody is going to shoot low. Hopefully it’s me.”

Johnson, who was paired with Canadian Nick Taylor on Saturday, could feel the encouragement of the crowd, crediting the support in part to his personal connection to hockey legend Wayne Gretzky.

“Well, I can thank Wayne for that,” added Johnson. “There’s a lot of Gretzky fans out there, and so they tend to pull for me, which thanks Wayne, I appreciate that.”

Tway briefly overtook the lead during his round, getting to 18-under before a costly bogey on 18 dropped him back into a share of the lead with Johnson, Hun An and Kim.

“It was a little struggle at the start, maybe (I was) a little nervous,” said Tway, whose father Bob won the RBC Canadian Open in 2003. “I’m just going to relish the opportunity. I’ve got nothing to lose, so I’m going to try to make as many birdies as I can.”

It was moving day at Glen Abbey on Saturday with many golfers vaulting up the leaderboard and into contention. Hudson Swafford shot 67 to climb 10 spots into a share of fifth with Rory Sabatini, while Mexico’s Abraham Ancer shot 65 to climb 37 spots to T7 position. Mackenzie Hughes of Dundas, Ont. shot 67 to climb into a share of 13th position at 11-under. Calgary’s Ryan Yip, making his first-ever RBC Canadian Open appearance, carded the low Canadian round of the day, 66, to climb to T21 at 10-under.