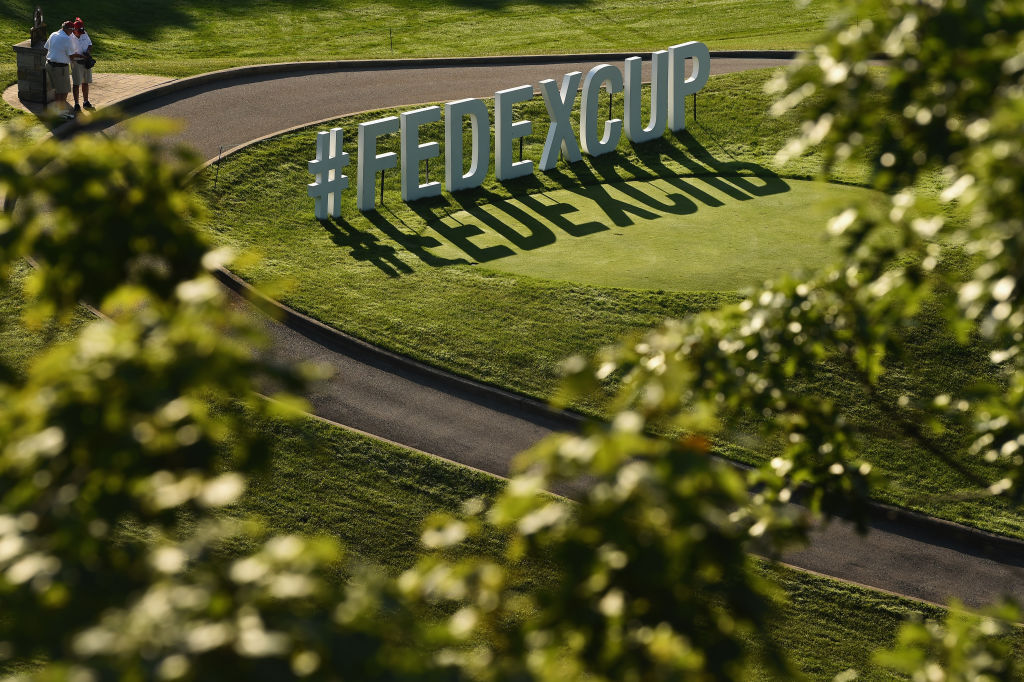 OAKVILLE, ON - JULY 27: A view of the back nine with the FEDEXCUP signage during the second round at the RBC Canadian Open at Glen Abbey Golf Club on July 27, 2018 in Oakville, Canada. (Photo by Minas Panagiotakis/Getty Images)
RBC Canadian Open

PONTE VEDRA BEACH, FLORIDA – With the upcoming 2018-19 PGA TOUR schedule reflecting previously announced, significant structural changes, PGA TOUR Commissioner Jay Monahan today unveiled further innovations that elevate the entire FedExCup season – from the Regular Season through the FedExCup Playoffs and ultimately, at the Playoffs Finale, the TOUR Championship. These changes include a simplified scoring system at the TOUR Championship that will determine the FedExCup Champion and a new $10 million program for the FedExCup Regular Season sponsored by Wyndham Rewards: the “Wyndham Rewards Top 10.”

The FedExCup Playoffs – which have been reduced from four to three events beginning next season and will conclude before Labor Day, allowing the TOUR to compete to own the August sports calendar – will feature fields of 125 for THE NORTHERN TRUST, 70 for the BMW Championship and 30 for the TOUR Championship, where the FedExCup Champion will be determined. While the points structure for the first two events will remain the same (awarding quadruple points compared to FedExCup Regular Season events), there will be a significant change to the format for the TOUR Championship.

Instead of a points reset at East Lake Golf Club in Atlanta, beginning with the 2018-19 event the TOUR is instituting a strokes-based bonus system related to the FedExCup standings through the BMW Championship. The FedExCup points leader after the first two Playoffs events will begin the TOUR Championship at 10-under par. The next four players will start at 8-under through 5-under, respectively. The next five will begin at 4-under, regressing by one stroke per five players until those ranked Nos. 26-30 start at even par.

With the implementation of this change, the player with the lowest total score will be the FedExCup Champion and be credited with an official victory in the TOUR Championship competition.

“This is a significant and exciting change for the PGA TOUR, our players, our partners and – most importantly – our fans,” said Monahan. “As soon as the TOUR Championship begins, any fan – no matter if they’ve followed the PGA TOUR all season or are just tuning in for the final event – can immediately understand what’s going on and what’s at stake for every single player in the field. And, of course, players will know exactly where they stand at all times while in play, which will ratchet up the drama, consequence and volatility of the competition down the stretch.

“Compared to the current system, the beauty here is in the simplicity. Fans are very familiar with golf leaderboards in relation to par, so they will have a clear understanding of the impact every shot makes during the final run for the FedExCup – ultimately leading to a singular champion without conflicting storylines.”

“It has been gratifying to witness the growth, popularity and importance of the FedExCup since its launch in 2007,” said Davis Love III, a current Player Director on the PGA TOUR Policy Board who also served on the Board during the development and launch of the FedExCup. “Several important refinements have been made along the way to help accelerate the FedExCup’s universal acceptance as a tremendous achievement in professional golf.

However, I believe this new strokes-based bonus system for the TOUR Championship might well be the most important of them all, as it will lend absolute clarity to where everyone in the field stands and what exactly they must do to win the FedExCup. It will make for a very exciting and dramatic four days.”

Meanwhile, the new $10 million Wyndham Rewards Top 10 not only will add drama to the Wyndham Championship as the final event before the FedExCup Playoffs but will also put an even greater premium on excelling over the course of the FedExCup Regular Season. The top-10 Regular Season finishers in FedExCup points through the Wyndham Championship – also sponsored by Wyndham Rewards – will reap the benefits of the Wyndham Rewards Top 10. The leader will earn $2 million, followed by $1.5 million for the runner-up with the 10th-place finisher earning $500,000. Additionally, each player in the top 10 will be invited into Wyndham Rewards at its most exclusive Diamond level, unlocking all the travel perks and unique Wyndham benefits that go along with it.

And while the Wyndham Rewards Top 10 will be recognized at the conclusion of the Wyndham Championship, the impact of the program will be felt throughout the season; a player’s performance every week becomes more critical than ever before, elevating the significance of each tournament on the schedule and producing drama for PGA TOUR fans at every turn.

“We are excited to unveil the Wyndham Rewards Top 10 next year, which will place an even greater premium on excelling over the course of the Regular Season,” said Andy Pazder, Chief Tournament and Competitions Officer for the PGA TOUR. “Season-long success is tantamount to qualifying for and advancing through the FedExCup Playoffs, and this is an exciting way to reward the best of the best and provide an added layer of drama for our fans in each market and around the world.”

In addition to the $10 million Wyndham Rewards Top 10, the existing FedExCup bonus pool will increase by $25 million, to $60 million. The FedExCup Champion will receive $15 million, versus the $10 million prize from previous years.

“Our players and fans have invested in the FedExCup over the past 12 seasons, and with these enhancements, we are reinvesting in the FedExCup in order to raise the stakes, so to speak, for their benefit,” said Monahan. “We are able to grow and diversify our fan base because we have the best athletes on the planet competing on the PGA TOUR. Now is the time to make these changes, and thanks to significant input in the process by our players, partners and fans, I believe we’re making exactly the right moves.

“To that end, these changes wouldn’t have been possible without the full support of the TOUR Championship’s outstanding Proud Partners – Coca-Cola and Southern Company – as well as longtime partner FedEx and an enhanced partnership with Wyndham Rewards,” he added. “They shared our vision for how we can challenge ourselves to raise level of excitement and fan engagement throughout the season up until the moment our FedExCup Champion is determined.”