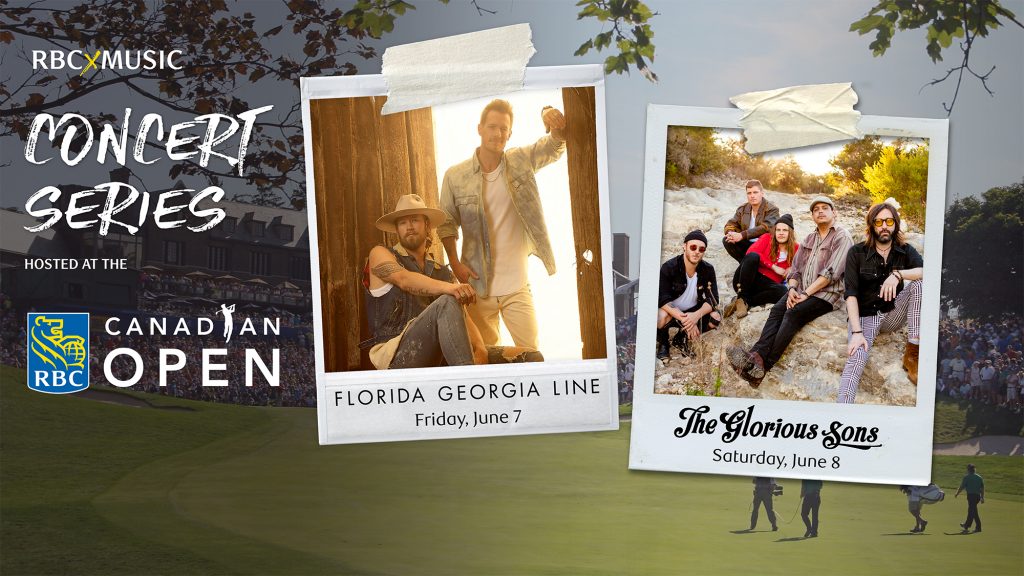 The concert series will be held on the iconic grounds of the Hamilton Golf and Country Club on June 7 and 8, 2019, and will offer an enhanced experience for golf fans, music lovers and players alike.

Global entertainers Florida Georgia Line are well known for their innovative artistry and chart-topping songs – including their 16th #1 hit “Simple” and breakout 11X-PLATINUM smash “Cruise.” Their fourth studio album CAN’T SAY I AIN’T COUNTRY (BMLG Records) recently arrived, racking up over 473,000 album consumption globally to date, and debuting at #1 on the Billboard Top Country Albums chart. The project features current chart-rising single “Talk You Out of It.” The pair will launch their North American 2019 CAN’T SAY I AIN’T COUNTRY TOUR this summer. Canadians will have the opportunity to see FGL live in concert at the RBC Canadian Open on June 7, 2019 – their only Canadian stop this year.

“We’ve always had an epic time performing in Canada,” says FGL’s Tyler Hubbard. “Our Canadian fans sure know how to bring the party!”

FGL’s Brian Kelley adds, “We just can’t wait to be back and play our new songs!”

“This is exciting news”, said Team RBC ambassador and PGA TOUR professional Dustin Johnson. “I’m a big fan of Florida Georgia Line, and this concert series is a great opportunity to open up this tournament to a whole new fan base.”

In addition, The Glorious Sons, hailing from Kingston, ON, will be performing on Saturday June 8th, 2019 at the concert series. The band have ten consecutive top-10 songs on Canadian Rock radio including the Gold-certified single “Everything Is Alright”, and recently enjoyed four weeks at #1 on the U.S. rock charts with their hit single “S.O.S. (Sawed Off Shotgun)”. They are currently on their headline “S.O.S. Tour” in the United States, which has included sell-out performances in Philadelphia, Detroit, Minneapolis, Chicago, Denver and Buffalo.”

“It’s very exciting to have Florida Georgia Line and The Glorious Sons perform at this year’s RBC Canadian Open,” said Mary DePaoli, Executive Vice President and Chief Marketing Officer, RBC. “We are committed to creating an unforgettable fan experience, and our new concert series is a unique opportunity to connect golf and music fans of all ages.”

Tickets are all-inclusive: your tournament day pass is your concert ticket.

“Adding the Concert Series is another special moment in continuing to elevate the RBC Canadian Open experience, and welcoming new audiences to the golf course,” said Golf Canada CEO Laurence Applebaum. “We are thrilled that RBC has integrated the RBCxMusic platform with their incredible support of the RBC Canadian Open.”

The RBC Canadian Open’s return to the historic Harry Colt designed course in 2019 is timed perfectly – marking the 100-year anniversary since the renowned club originally first hosted the Open. This year will be the sixth time the Hamilton Golf and Country Club has played host to Canada’s National Open Championship (1919, 1930, 2003, 2006 and 2012).

In addition to the concert series, the tournament will feature new spectator enhancements, including a local foodie and patio experience, junior initiatives, the RBC Hall of Fame Day celebration and the return of The Rink, awarded 2018 best-in-class element by the PGA TOUR.

WHAT:           RBCxMusic Concert Series at the RBC Canadian Open

WHERE:        The Hamilton Golf and Country Club

Tickets will be available for purchase at RBCCanadianOpen.com/tickets. Tickets are $75 (plus taxes and service charges). The event is General Admission / All Ages. Your tournament day pass is your concert ticket.