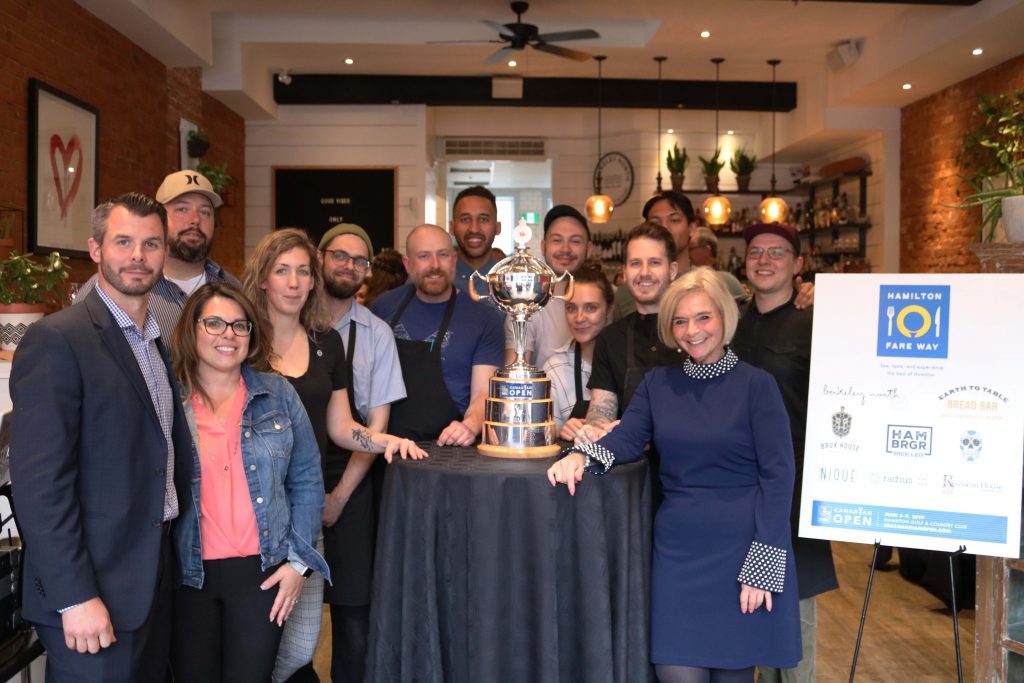 HAMILTON (Golf Canada) – The RBC Canadian Open has partnered with Tourism Hamilton and several of the city’s pre-eminent restaurants to deliver a unique culinary experience to fans attending one of Canada’s premier sporting events this June.

The Hamilton Fare Way is a new on-site food initiative taking place at this year’s RBC Canadian Open, being held June 3-9, 2019 at Hamilton Golf and Country Club. The gastro-experience will highlight the city’s vibrant culinary scene through an exciting partnership with Tourism Hamilton.

“World class golf, food and music is what the new RBC Canadian Open is all about,” said Bryan Crawford, RBC Canadian Open Tournament Director. “Our championship has always been synonymous with terrific golf. Earlier this year, we announced the addition of the RBCxMusic Concert Series onsite featuring Florida Georgia Line and the Glorious Sons on Friday and Saturday of tournament week. Now we’re thrilled to bring together talented chefs from Hamilton’s exploding food scene as a dynamic addition to the RBC Canadian Open.”

Eight restaurants will be featured June 6th to 9th of tournament week as part of The Hamilton Fare Way, which will be located between holes 17 and 18 at Hamilton Golf and Country Club.

“Having these wonderful restaurants featured at the 2019 RBC Canadian Open is an absolutely terrific opportunity for the City of Hamilton,” says Sharon Murphy, Manager Tourism & Events at the City of Hamilton. “There is so much momentum behind the dining and arts scenes in our city and this is an exciting opportunity for golf and music fans to experience what our city has to offer.”

The Hamilton Fare Way will celebrate some of the arts & culture that make Hamilton so unique, and will include musical performances, interactive installations and more programming from some of the city’s dynamic artists.

One of the most storied events on the PGA TOUR schedule, the 2019 RBC Canadian Open returns to Hamilton Golf and Country Club for the first time since 2012.

More information about the 2019 RBC Canadian Open including tickets, corporate hospitality and volunteer information is available at www.rbccanadianopen.com.

Restaurants participating the The Hamilton Fare Way at the 2019 RBC Canadian Open include:

Bread Bar (258 Locke St. South)
Offering handcrafted food made with the finest ingredients and an ‘earth to table’ philosophy for people who want a better quality meal.

The Brux House (137 Locke St. South)
Inspired by the European beer belt, it uses quality, local ingredients that cater to those looking for refined but approachable dishes.

Mezcal (150 James St. South)
A Mexican-inspired eatery, mixing ingredients from Mexico, Latin America, and locally in Hamilton for its chefs to cook “with a conscience.”

Nique (30 Vine St.)
Food that is inherently Canadian, with a cultural mosaic of a menu.

Radius (151 James St. South)
A local-first eatery with a menu chalk full of items, where possible, from the produce and fine meats of its very own farmers, and from its own farm in Carlisle.

Rousseau House (375 Wilson St. East)
Our restaurant is a local casual upscale experience with a great patio. Under Construction to transform into a state of the art Micro Brewery.