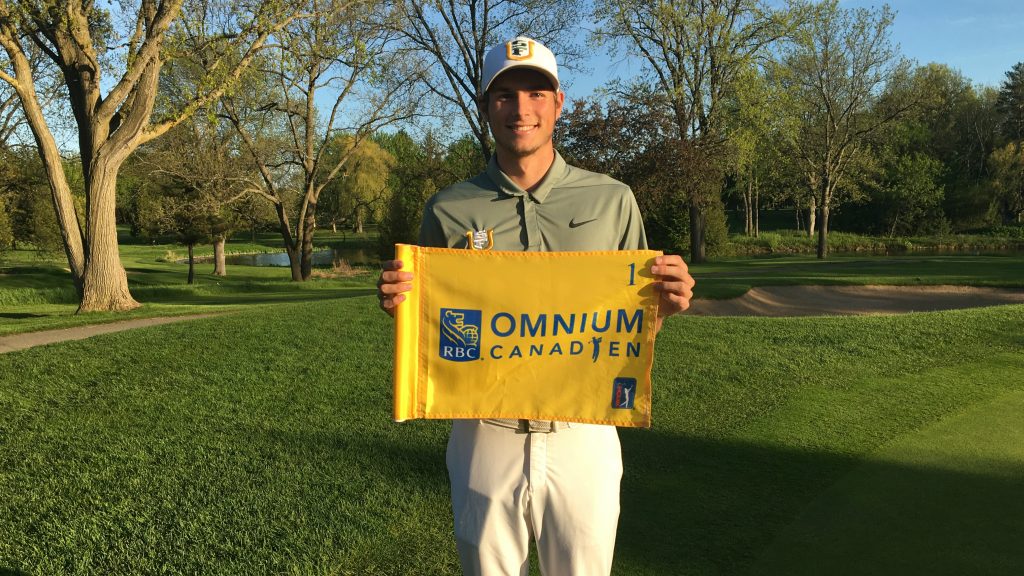 Since there were more than 100 players at the event, Anderson, by topping the field, gained direct entry into the RBC Canadian Open field.

“This is one of the best golfing days of my life, so far,” said Anderson who turned 19 in April. “To play a PGA TOUR event, that’s something I’ve been dreaming of. It’s unbelievable that it’s actually happening.”

Anderson, who had one of the last tee times of the day, chased down St-Jérôme, Qué. native Tim Alarie. Alarie had built what looked to be an insurmountable lead after carding a 4-under-par 68.

Anderson bogeyed his first hole, but then went on a tear, knocking in five birdies and walking up to the 17th tee tied with Alarie atop the leaderboard.

The University of San Francisco freshman birdied the par-5 17th, then made par on the 18th hole to card a 5-under 67 and secure an exemption into his country’s national open.

“I thought the lead may have been five-or six-under,” said Anderson, who didn’t know he was leading walking up to the 18th green. “I wasn’t quite sure, but I knew if I got a par or birdie on 18, I had a chance.”

Anderson started three events with the University of San Francisco Dons this past season. He finished second at the 2018 Ontario Junior Boys’ Championship.

Alarie was atop the leaderboard for most of the day following a 4-under-par 68. The 28-year-old was strong on the front nine, notching four birdies to put himself temporarily in the low qualifier spot.

Étienne Brault, an amateur from Mercier, Qué., also put together a solid round, finishing at 3-under-69.

Alarie and Brault are among the 18 golfers advancing to the RBC Canadian Open Final Qualifier, which takes place Monday, June 3 at Heron Point Golf Links in Alberton, Ont.

Michael Blair earned an exemption directly into the RBC Canadian Open as the low qualifier at the second regional qualifying event at TPC Toronto on May 16.

A minimum of four players from the 18-hole stroke play final qualifier on June 3 will gain entry into the RBC Canadian Open field.