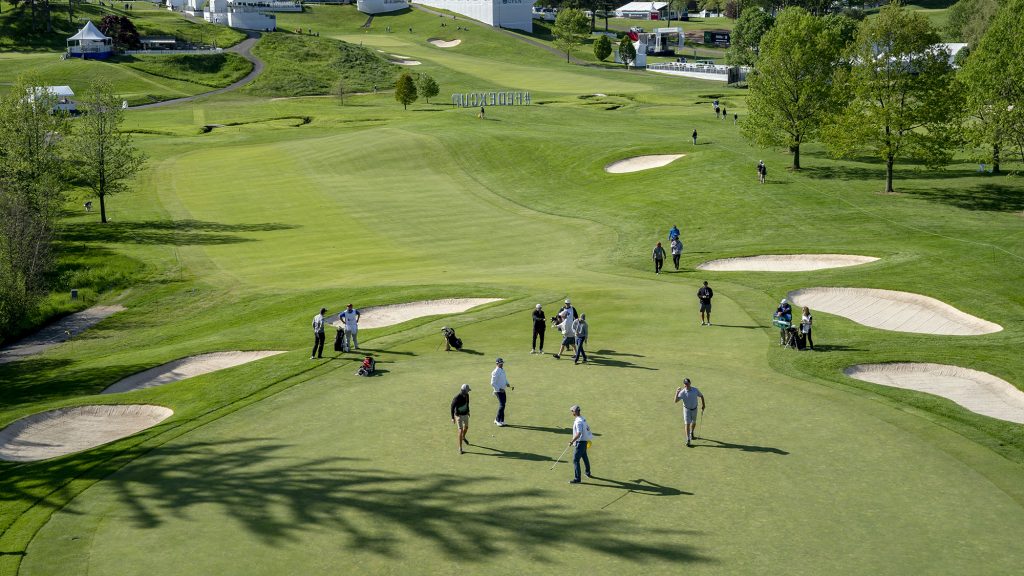 Although it didn’t feel like summer as the players started to stream into the immaculately groomed grounds of Hamilton Golf and Country Club as a mix of sun and breeze kept the sweaters on, the fans know that summer is here, and the RBC Canadian Open is heating up.

Summer means a lot of things to a lot of people, but for the thousands of fans spread across Hamilton’s acreage, summer means golf. There were veteran police officer volunteers, running security detail on errant balls finding the heavy rough; there were young kids lining up on the range for autographs, proudly telling the players that their Dad let them skip school to come to watch the game they loved; and there was a swarm of media members, the tented structure abuzz with talk of the game’s biggest names, Rory, DJ, Brooks and others in attendance this week.

The best way to spend a Monday of Championship level golf is to get to know the course, and how the players intend on playing it. So at 9 a.m., I picked up the group of Hank Lebioda, and Tyler Duncan, leaving the range on their way to the first tee.

Greeting their crowd of spectators with smiles from both players, we were off, and the fun of watching two of the game’s best up-and-coming was plentiful. It is a Monday after all, and the two players, never having seen the course before, were using all their instrumentation to try and dissect the unique challenge that the beautiful Hamilton Golf & Country Club presents.

Quickly, the two professionals in their craft figured out that the rough is a double-bogey maker. The thick, wet, “healthy” rough as Duncan said, is closer to what you’d expect at the Open that takes place south of our border than its Canadian counterpart. “You guys sure know how to grow grass up here,” Duncan said as he chunk-and-runned one up to par-4 ninth hole to an echo of the crowds’ laughter.

After their nine-hole match completed, I had the chance to step aside with Hank Lebioda of No Laying Up fame. He said, “I mean this course is tough but you can score here, someone could go really low this week if they hit all the fairways.” Live Under Par indeed Hank, and from what I saw on the course, it could be him, why not right? “I absolutely love the course,” continued Lebioda, “It’s such a cool, classic design and the layout is amazing. I wish we played way more courses like this on TOUR.”

Hamilton has already been receiving a ton of praise from the TOURs top players, and it shows in the strength of the field. Dustin Johnson, Brooks Koepka, Rory McIlroy, Matt Kuchar, Justin Thomas and more are showing up in Hamilton this week, even Florida Georgia Line and The Glorious Sons are coming to the party, and Canada has come to bear witness.