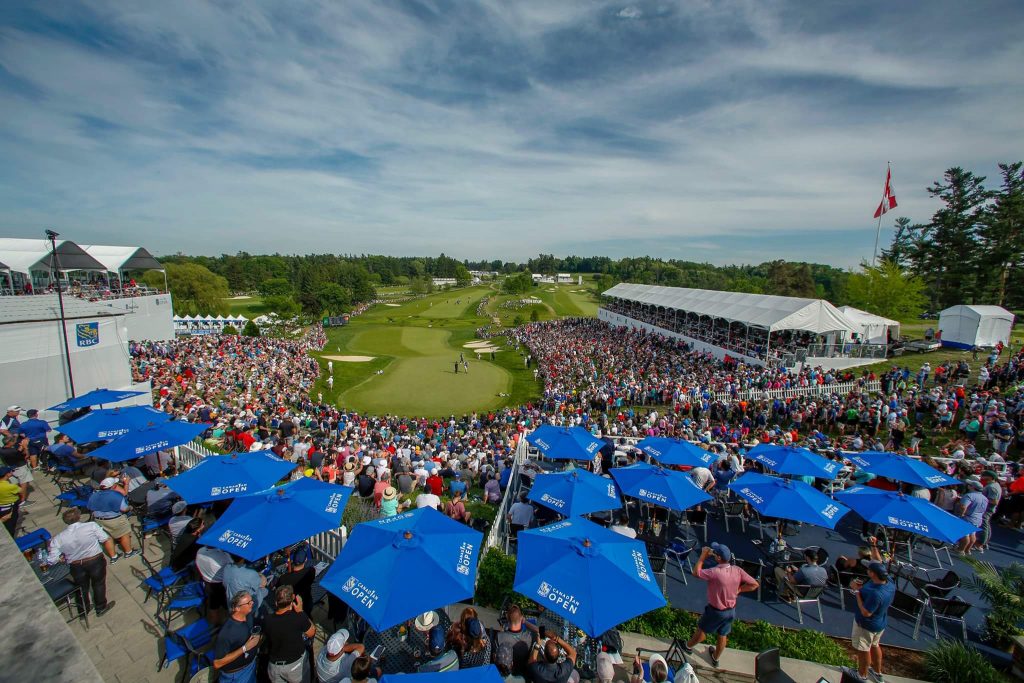 The landmark agreement, announced in November 2020, further enhances and connects the ecosystem of men’s professional golf through a number of areas, including global scheduling, prize funds and playing opportunities for the respective memberships.

In terms of scheduling, the most significant piece of collaboration is the fact that three tournaments will be co-sanctioned in 2022 and therefore count on both the PGA TOUR’s FedExCup and the European Tour’s Race to Dubai next season: the Barbasol Championship; the Barracuda Championship; and the Genesis Scottish Open.

The Genesis Scottish Open (July 4-10), which is part of the European Tour’s Rolex Series, retains its place in golf’s global calendar the week ahead of The Open Championship (July 11-17), a date confirmed through to 2025. The player field will be a split between members of both Tours.

The tournament will also benefit from the continued commitment of the Scottish Government, managed by Visit Scotland – the agreement also running through 2025.

“We are delighted to welcome Genesis as a title sponsor of a European Tour event for the first time,” said European Tour Chief Executive Keith Pelley. “Genesis has a strong history of sponsorship on the PGA TOUR through The Genesis Invitational, and their commitment to the Scottish Open will further enhance one of our premier events of the season.”

Although it will be on the PGA TOUR’s official schedule for the first time, the Genesis Scottish Open has a rich history on the European Tour, appearing in the Tour’s first two official seasons (1972 and 1973) and as part of the Tour’s International Schedule since 1986. It has also been part of the Rolex Series – the European Tour’s premium series of events – since the Series’ inception in 2017.

“Adding an existing, strong title sponsor in Genesis to our Strategic Alliance in the form of the Genesis Scottish Open – to be sanctioned by both Tours – is a significant step for the global game,” said PGA TOUR Commissioner Jay Monahan. “Coupled with their support of The Genesis Invitational at Riviera, we’re incredibly proud to forge a deeper relationship with this premier brand across the global game.”

Genesis will take over the title sponsorship of the event from abrdn, who are exploring ways for the decade-long partnership with the European Tour to continue moving forward. The venue for the 2022 Genesis Scottish Open will be confirmed at a later date.

“We are extremely excited to become title sponsor of the Scottish Open at this historic moment, as the PGA TOUR and European Tour announce details on their Strategic Alliance,” said Jay Chang, Global head of Genesis. “Genesis and golf share a culture centered on respect, mutual admiration and innovation. We will continue to strengthen our partnership with both Tours to deliver this spirit to golfers, communities and individuals around the world through successful tournaments.”

Paul Bush, Director of Events at VisitScotland, said, “We are thrilled the European Tour and PGA TOUR have identified the Genesis Scottish Open to further develop their Strategic Alliance, and there is no more fitting stage than Scotland, the Home of Golf, on which to embark on such a historic journey.”

In addition to the Genesis Scottish Open being co-sanctioned, there will also be access for 50 European Tour members to each of two PGA TOUR events in 2022 for the first time – the Barbasol Championship, which will be played concurrently with the Genesis Scottish Open, and the Barracuda Championship, which will be played alongside the following week’s 150th Open Championship at St. Andrews. Both events will be added to the Race to Dubai for European Tour members.

It was also confirmed today that as part of the Strategic Alliance and collaboration between the two Tours, the Irish Open will see a significant increase in prize money for its annual European Tour event – to $6 million, starting in 2022 – nearly double the amount on offer at Mount Juliet last month. In addition, the PGA TOUR will continue to work with the European Tour on commercial opportunities across the Tour.

“When we announced the Strategic Alliance at the end of last year, we said it was a landmark moment for global golf’s ecosystem that would benefit all members of both Tours,” said Pelley. “Today’s announcement underlines that promise, with further enhancements to the Genesis Scottish Open, a strengthening of the Irish Open for our members, and direct access for European Tour members to two PGA TOUR events.

“There has been considerable collaboration behind the scenes between our two Tours since November’s Alliance was unveiled, and we are delighted to share these initial developments, which demonstrate our commitment to working together for the betterment of our sport globally.  We will have more to announce in the coming months – this is most definitely just the beginning.”

“With today’s news, I am pleased to say that the PGA TOUR and the European Tour are both stronger than at any time in our history, as we are positioned to grow – together – over the next 10 years faster than we have at any point in our existence,” said Monahan. “We are committed to continuing to evolve and adapt, and with our ever-strengthening partnership with the European Tour, to take the global game to the heights we all know it is capable of.”

The 2021-22 PGA TOUR Schedule includes several significant enhancements and features a total of 48 official events – 45 during the FedExCup Regular Season along with three 2022 FedExCup Playoffs events.

The 2022 portion of the schedule will kick off the PGA TOUR’s new, nine-year domestic media rights agreements with ViacomCBS, Comcast/NBC and ESPN. As part of the agreement, all three 2022 FedExCup Playoffs events will be broadcast domestically on NBC network television, beginning a rotation that continues with CBS hosting all three events in 2023.

Headline news includes the change in location and venue for the kickoff of the FedExCup Playoffs to TPC Southwind in Memphis, Tennessee, starting in 2022, replacing the Regular Season event that has been held in Memphis since 1958. FedEx will serve as the title sponsor of the event, to be known as the FedEx St. Jude Championship (August 8-14), replacing existing title sponsor Northern Trust after this year’s playing of THE NORTHERN TRUST at Liberty National Golf Club in Jersey City, New Jersey.

“FedEx is excited that the first event of the 2022 FedExCup Playoffs will be hosted in our hometown of Memphis, Tennessee,” said Raj Subramaniam, President and Chief Operating Officer of FedEx Corporation. “We are proud of our history and the community impact we’ve had since becoming title sponsor of our hometown TOUR stop in 1986. We look forward to the impact it will bring to our local community and will continue to use it as a platform to showcase the groundbreaking work being done by St. Jude Children’s Research Hospital to golf fans around the world.”

“Since the inception of the FedExCup in 2007, we have made a number of changes to enhance the quality of the FedExCup Playoffs for our players, fans and partners,” said Monahan. “Thanks to the continued support from FedEx as the TOUR’s umbrella partner, we’re proud to bring the start of the FedExCup to Memphis and a course loved by our players. Not only will it be a great test worthy of Playoff golf, but we also anticipate tremendous enthusiasm from a community that has steadfastly supported the PGA TOUR for more than 60 years. And, of course, the important work of St. Jude Children’s Research Hospital will continue to be front and center.

“In totality, the 2021-22 PGA TOUR Schedule, combined with the momentum we have with our now-entrenched partnership with the European Tour, puts the PGA TOUR in a position of strength within professional golf like never before. We’re confident this schedule will give the world’s best players the opportunity to do what they do best – inspire and entertain our fans around the globe while helping our tournaments make a significant impact in their respective communities.”

The PGA TOUR’s flagship event, THE PLAYERS Championship (March 7-13), will anchor a true Florida Swing in 2022, which features four consecutive events through The Sunshine State in the spring, including the Valspar Championship, which was played in April/May this past year. THE PLAYERS will be in year three of its March date and as a kickoff to the Season of Championships, with Justin Thomas returning as defending champion.

The Memorial Tournament presented by Workday (May 30-June 5) enters the first year of a 10-year agreement in 2022 with new presenting sponsor, Workday. Founded in 1976 by golf legend Jack Nicklaus and held annually at Muirfield Village Golf Club in Dublin, Ohio, the tournament partners for the first time with three-time NBA champion and two-time MVP Stephen Curry of the Golden State Warriors, and Ayesha Curry, an entrepreneur, host and New York Times bestselling author.

After a two-year hiatus due to the pandemic, the RBC Canadian Open (June 6-12) in Toronto, Ontario, Canada, returns to the schedule in 2022 at St. George’s Golf and Country Club. Rory McIlroy won the last RBC Canadian Open, played in 2019.

Other notable items and changes to the 2021-22 PGA TOUR Schedule include (in chronological order):

The European Tour will announce the initial portion of its 2022 schedule later this month, with the full season announcement to follow in due course.