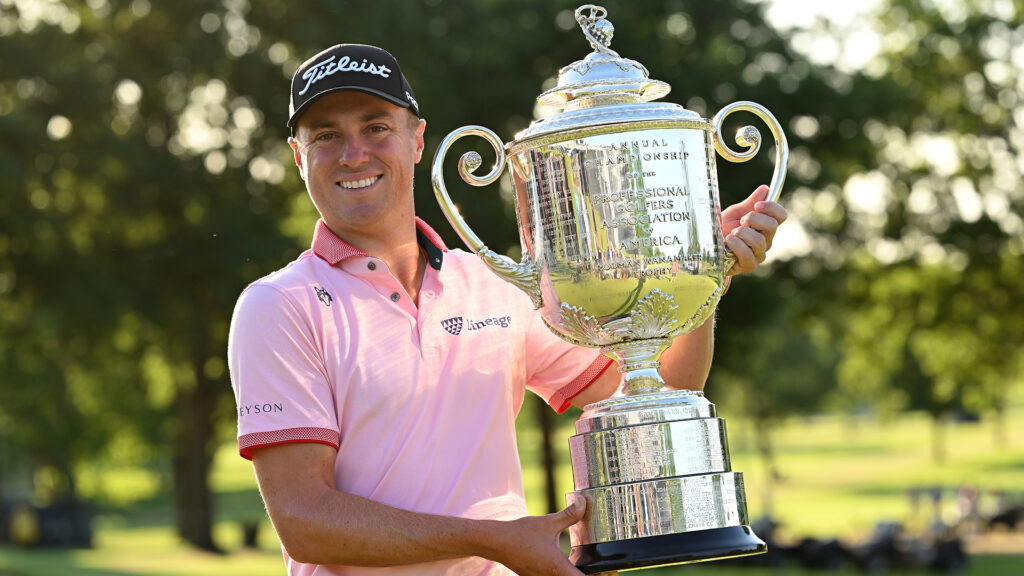 TULSA, OKLAHOMA - MAY 22: Justin Thomas of the USA celebrates with the Wanamaker Trophy after the final round of the PGA Championship at Southern Hills Country Club on May 22, 2022 in Tulsa, Oklahoma. (Photo by Ross Kinnaird/Getty Images)
RBC Canadian Open

Fresh off a captivating playoff victory this past weekend at the PGA Championship, Justin Thomas has confirmed his intention to compete in the 2022 RBC Canadian Open.

Thomas is a 15-time winner on the PGA TOUR and 2-time major champion, having previously won the PGA Championship in 2017. Currently no. 5 on the Official World Golf Ranking, Thomas will be competing in his second RBC Canadian Open when the stars of the PGA TOUR descend on St. George’s Golf & Country Club along with nearby Islington Golf Club as the official practice facility.

A celebrated amateur and college star at Alabama, the 29-year-old returns north to challenge for Canada’s National Men’s Open Championship after finishing T20 at Hamilton Golf and Country Club in 2019 in his first-ever start at the event.

One of the brightest stars in professional golf, Thomas has competed in the past two Ryder Cups, the past two President’s Cups and also represented the United States at the Olympic Games in Tokyo last summer.

Through a solid start to the 2021-22 PGA TOUR season, Thomas has eight top-10 finishes in 13 events played and is currently no. 4 on the FedExCup Ranking. Five of his 15 PGA TOUR wins came during a breakout season in 2016-17.

More field announcements including additional Canadian player exemptions are set for the coming weeks as golf and festival fans look ahead to the 111th playing of Canada’s National Men’s Open Championship. Tickets for the 2022 RBC Canadian Open are available here.