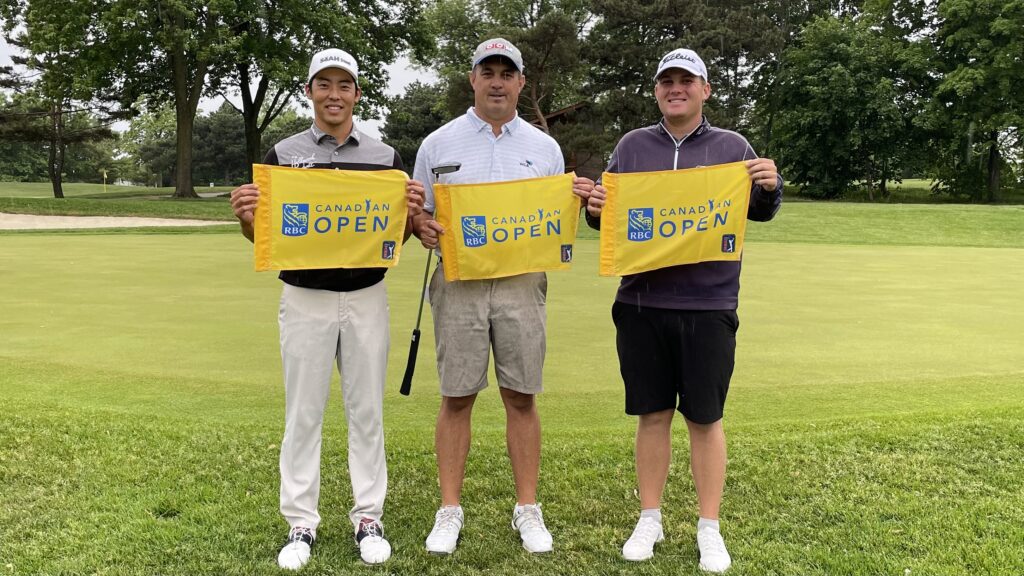 Jeff Kang (left), Brad Adamonis (middle) and Braden Thornberry (right) clinch their spots at the 2022 RBC Canadian Open via a playoff at the Final Qualifier at Oakdale Golf and Country Club in Toronto, Ont. on Jun 6, 2022.
RBC Canadian Open

TORONTO – Patrick Flavin beat the rush hour traffic but Braden Thornberry, Brad Adamonis and Jeff Kang got caught in the thick of things at the 2022 RBC Canadian Open Final Qualifier on Monday. Thankfully for them, the highway to St George’s Golf and Country Club opened up quickly.

Thornberry, Adamonis and Kang survived a 4-for-3 playoff at Oakdale Golf & Country Club to secure three of the final four spots at the 2022 RBC Canadian Open, June 6-12, at St George’s Golf and Country Club in Toronto, Ont.

The trio of Americans, who registered rounds of two-under par 69 in regulation, made their pars on the second playoff hole to settle a four-way tie. Piercen Hunt did not make it through.

Flavin carded a three-under par 68 earlier in the day to dodge the madness and punch his ticket to the National Open Championship.

The Chicago, Illinois native was one-over after the front nine but turned things around down the stretch to fire the low round of the day.

“You’re never as far out of it as you think,” he said. “There’s been a couple shockers this year where it’s not as low as you think, especially with this course being so hard. I figured anything under par was going to be a really good score, so three-under when I finished, I felt really good about.”

Flavin is no stranger to Monday qualifiers. The 18-hole stroke play tournament in Toronto, Ont. marks his fourth entry into a tournament via the final qualifier this season, and his sixth total PGA TOUR event in 2022.

“When you Monday in it’s kind of a little bit of a whirlwind because there’s so much to get done, but I think I’ve developed a good formula for what is going to allow me to play well and have a lot of energy on the weekend,” said the 26-year-old.

Adamonis found the greenside bunker on the second playoff hole but for him, that was just as good as hitting the green.

“Long ago, I had a bunker in my yard and I’m like, ‘I’ve hit these a million times, this is an easy shot,’” Adamonis told himself. “I felt comfortable, I didn’t even think about it, and I hit a good shot,” added the 49-year-old journeyman.

The RBC Canadian Open will be Adamonis’ first start on TOUR since the 2021 Valspar Championship.

Thornberry was rolling at Oakdale, sitting at four-under par thru 14 holes but bogeys on No. 16 and 17 forced him down into a T2 position and into the thick of things on the leaderboard but the former Ole Miss Rebel was able to collect himself and prevail.

“I think I had the best round going through 14 holes […] I feel like I was playing really good but kind of didn’t play well coming in, so it was nice to still get through and not have that cost me at all,” said Thornberry.

Thornberry’s first trip to Canada has already been memorable and the Germantown, Tennessee native will look to add to the memories when he tees it up on Thursday.

Flavin, Thornberry, Adamonis and Kang complete the starting field of 156 that will compete for the $8.7 million purse at St George’s Golf and Country Club. Click here for the full list of competitors.

For tickets to the 2022 RBC Canadian Open click here.