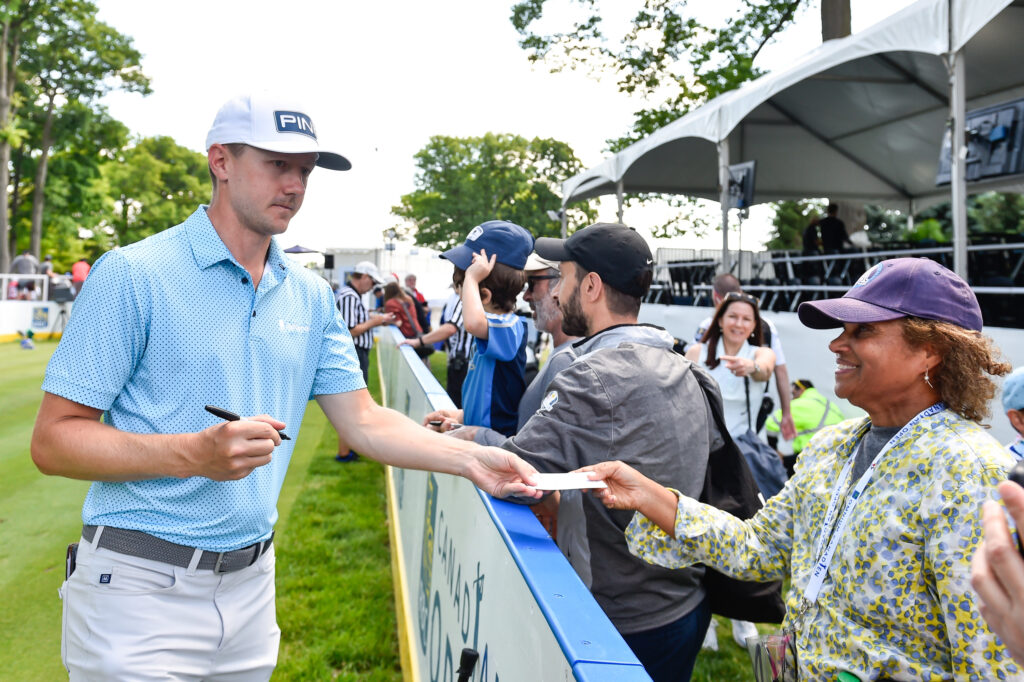 ETOBICOKE, ON - JUNE 08: Mackenzie Hughes of Canada signs autographs for spectators from the 16th tee box during the pro-am prior to the RBC Canadian Open at St. George's Golf and Country Club on June 8, 2022 in Etobicoke, Ontario. (Photo by Minas Panagiotakis/Getty Images)
John Chidley-Hill

Mike Weir didn’t expect to have much of a gallery on a rainy Thursday morning at St. George’s Golf and Country Club.

But there were dozens of fans waiting for him and fellow Canadians Mackenzie Hughes and Adam Hadwin at the 10th tee as play began in the first round of the RBC Canadian Open. Weir said he appreciated the support from a crowd that swelled to hundreds by the time he’d played all 18 holes.

“Especially at 7 in the morning when it’s raining, it’s nice to see so many people here early,” said Weir. “When you get some momentum, you can feed off the crowd.”

The 52-year-old Weir, from Brights Grove, Ont., shot a 2-over 72. He has the second most professional golf wins for any Canadian with eight, second only to Brooke Henderson.

Hughes, from Dundas, Ont., was the low Canadian on the morning. He finished his round tied with Americans Tony Finau and Lee Hodges as well as defending champion Rory McIlroy of Northern Ireland. Hughes said it was “awesome” to have such a large crowd following the trio around the course and attributed it to Weir’s enduring popularity.

“Everyone was out early even though we were off at 7 a.m.,” said Hughes. “I thought there wouldn’t be too many people out that early with the weather. It was fantastic and I felt it all the way around.”

Hadwin, from Abbotsford, B.C., shot a 1-under 69. He said that having the crowd spurred the group on to a strong start. He had a pair of birdies in the group’s first six holes and Weir had two to start the day.

“There was a lot of fun there those first four or five holes. We were all playing pretty well and making birdies,” said Hadwin. “So we got into a nice rhythm as a group.

“Obviously, two great guys that I’m very familiar with, so it was a very comfortable pairing today.”

The Canadian Open is the third oldest continually running national golf championship in the world, behind only the British and U.S. Opens. But the event hasn’t been held since 2019 due to the COVID-19 pandemic.

St. George’s in Toronto’s west end was originally scheduled to host in 2020 but it was cancelled twice as travel and health regulations were insurmountable hurdles to getting out a competitive PGA Tour field.

Absence makes the heart grow fonder, at least to Weir. He said Canadian players and fans alike were eager to see the Canadian Open held again.

“It’s been a couple years since we’ve been playing. I think everybody’s excited to see all the guys and see the players,” said Weir, who will be grouped with Hughes and Hadwin again on Friday.

“It was great to see the crowd support, and we’re going to have a great day tomorrow. It should be even better tomorrow.”

One member of the crowd was Lorie Kane, who is in Canada’s Golf Hall of Fame with Weir following her four wins on the LPGA Tour. The Charlottetown native said she was pleased to see such a large turnout supporting the Canadians.

Nick Taylor, also from Abbotsford, had an even par 70 in the first round.

Top ranked Canadian Corey Conners of Listowel, Ont., was tied with Jared du Toit of Kimberley, B.C., after 1-over 71 rounds. Myles Creighton of Digby, N.S., was a shot back of them.

Max Sekulic of Rycroft, Alta., shot a 5 over, Callum Davison of Duncan, B.C., had a 6 over, and amateur Brendan Leonard of Cambridge, Ont., was 8 over.