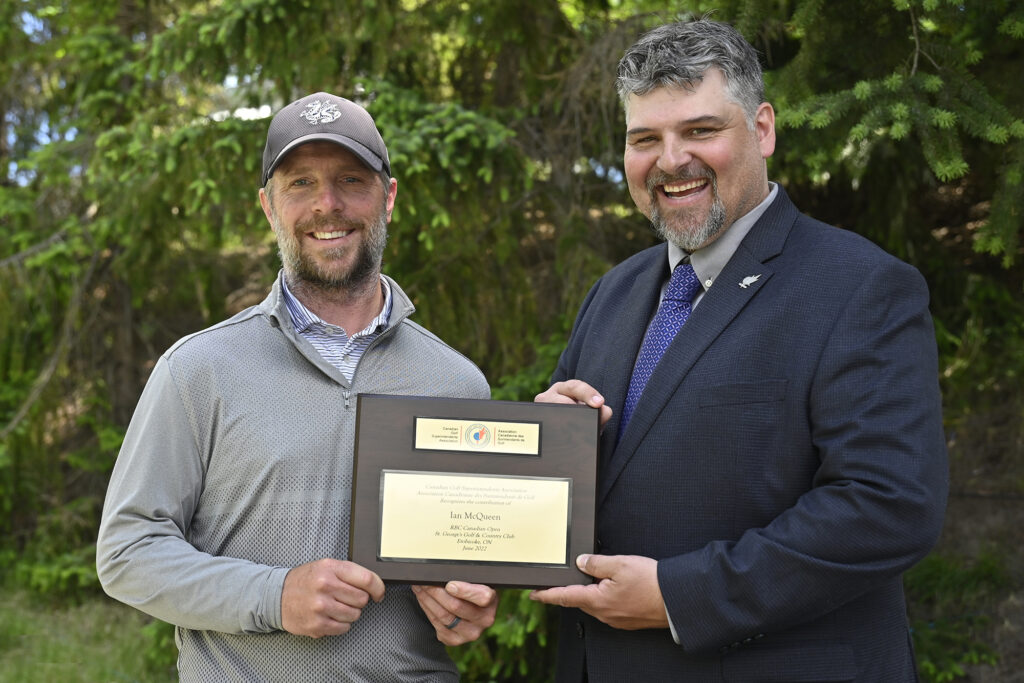 Ian McQueen’s extraordinary ability to  manicure a championship caliber golf course is on display, and the culmination of this achievement has not gone unnoticed.

The St. George’s Golf and Country Club superintendent was hosting his first PGA TOUR event, and his member association was on hand to present him with a commemorative plaque.

McQueen is an 18-year member of the Canadian Golf Superintendents Association (CGSA) whose reputation for ensuring the fair and consistent management of golf courses precedes him, and this award puts a stamp on his accomplishments.

“It means a lot,” he said. “It’s been a goal of mine to be at St. George’s, and come back to Toronto where I grew up and host a national event like this.”

The year marked the 111th RBC Canadian Open, aged only behind The Open Championship and the U.S. Open among national championships, and by nature presents challenges with rooted expectations.

Tasked with maintaining St. George’s member satisfaction, and meeting the Open’s  planning objectives, under the cloud of a pandemic, required strong leadership and the buy-in of his team. More remarkably, he ensured that St. George’s remains ranked among the top-five facilities in the country.

“Delaying it for a couple years actually gave us a great run through spring to make sure we had everything in place (for the tournament),” he said. “It was a challenge, but something that we accepted, and I think we accomplished as a team.”

Before arriving at St. George’s, McQueen honed his craft between public, semi-private and private golf clubs.

His previous club, The Club at Bond Head, has a long-standing reputation that praises its stunning views, challenging holes, and well-maintained grounds. It is also known for being tournament ready by May.

The key difference with managing St. George’s is the added support of private membership that helps him achieve the course conditions that fit his ideal vision.

“When you get to a private club like St. George’s, the support from the membership, board, and club allows you to achieve (the) goals and conditions that you want to produce on a day-to-day basis,” he said.

The challenges involved with managing a golf course in Canada’s climate also presents an unpredictability that is near impossible to gauge, and one that McQueen has consistently managed to handle.

“Managing turf conditions to the standard that we want takes into consideration all of the weather inputs; the uncontrollable that we can’t control makes it difficult,” he said. “I have a great staff of about 45 people, who you couldn’t do without — without them we would never get it to what it is today.”