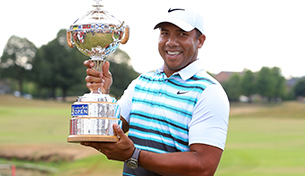 OAKVILLE, ON - JULY 24: Jhonattan Vegas of Venezuela poses with the trophy after winning during the final round of the RBC Canadian Open at Glen Abbey Golf Club on July 24, 2016 in Oakville, Canada. (Photo by Vaughn Ridley/Getty Images)
RBC Canadian Open

The 31-year-old began the day at 4-under, five-strokes off the lead at the historic Jack Nicklaus design. A string of five birdies from holes two to six vaulted Vegas into a share of second. He would notch four birdies on the back nine, including three straight across his final three holes to secure the clubhouse lead at 12-under and the eventual victory.

“That’s the fortunate breaks that sometimes you need to be a champion on the PGA Tour,” reflected Vegas when asked about the uncertainty that sometimes accompanies the sport. “It’s a great feeling. I mean, last week, I had a six-shot lead going into the weekend and lost by three. I was five back starting today and won by one. It’s a crazy sport. You’ve just got to keep your head down and play hard at every shot.”

The past three years have seen Vegas endure some highs and lows, dating back to shoulder surgery in 2013 which saw him miss nearly 10 months while recovering. Vegas spoke to the need for self-confidence when reflecting on the state of his game.

Vegas will compete in Rio de Janeiro when golf makes its long-awaited return to the Olympic stage after a 112-year absence. The Venezuelan Olympian was clear when asked to whom he would dedicate this victory, outside of his family.

“Definitely I want to dedicate it to the country because of all the tremendous support that I’ve had from them, even through the rough time they are having right now.”

The Vegas triumph closed a chapter on one of the biggest storylines heading into the final round – the performance of Kimberley, B.C., native Jared du Toit, who entered the day with a share of second alongside U.S. Open champion and World No. 2 Dustin Johnson. The 21-year-old garnered cheers from hosts of newfound fans as he attempted to become the first Canadian since Pat Fletcher in 1954 to earn the title of Canadian Open champion.

“Unbelievable. The atmosphere they were providing was unbelievable,” said du Toit, when asked about the experience of playing in the final round of the RBC Canadian Open. “Every tee box, like I said yesterday, every tee box, every green, everyone was clapping, hollering, “Go Canada!” It was truly unbelievable. I’m on cloud nine right now.”

du Toit, a member of Golf Canada’s National Amateur Squad, carded a 71 to move to 9-under and finish in four-way tie for ninth. The Arizona State University Sun Devil, who will begin his senior year in the fall, claimed the Gary Cowan Medal as low amateur. du Toit was at a loss for words when asked how he would have reacted to this outcome just a few days ago.

“I don’t know what I would say. Honestly, I had no expectations coming into this week. I thought maybe if I play well and make the cut…I honestly didn’t know. To come out this week and play well, Top-10 feels really good.”

Abbotsford, B.C., product Adam Hadwin registered a 71 to finish 1-under and claim the Rivermead Cup as the low Canadian professional.

The RBC Canadian Open will return to Glen Abbey Golf Club for a record 29th time in 2017 to build upon the continued partnership between the storied club and Canada’s National Open Championship.