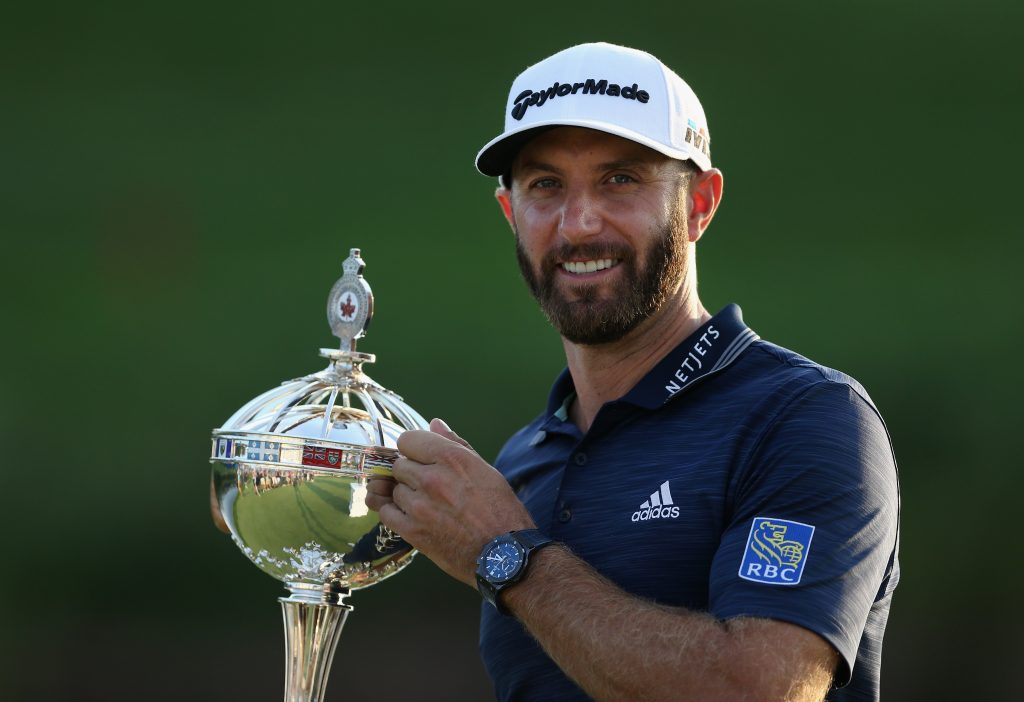 OAKVILLE, Ont. – (Golf Canada) World No. 1 Dustin Johnson fired a 6-under par 66 Sunday to pull away from the field and win his first RBC Canadian Open at 23-under par.

Johnson, who entered the day in a 4-way tie for the lead with Whee Kim, Byeong Hun An and Kevin Tway, carded seven birdies and a bogey to separate himself from the pack. He started the day with a pair of birdies on his first two holes, but a nearby storm suspended play shortly after Johnson hit his drive on the ninth hole.

After a one hour and 46-minute weather delay, play resumed at 5:12 p.m. Johnson electrified the Canadian crowd with four more birdies on the back nine. The only tarnish on his scorecard was a bogey on the par-3 No. 12.

“It was definitely good to get off to a fast start,” said Johnson. “That’s always good, especially when the leaderboard is so bunched up.”

Johnson, a Team RBC member from Columbia, S.C., felt like he was playing in front of a home crowd thanks to his fiancée Paulina and her father, hockey legend Wayne Gretzky.

Johnson had tied for second in the RBC Canadian Open at Glen Abbey Golf Club in 2013 and 2016.

Hun An and Kim shared second place with matching tournament totals of 20-under par.

Dundas, Ont., native Mackenzie Hughes won his second consecutive Rivermead Cup, awarded to the low Canadian, finishing in a tie for 8th at 15-under par.

Hughes started strong, gaining four strokes on the pack through his first seven holes before a bogey at the 8th hole. He recuperated nicely on his back nine with a birdie in Glen Abbey’s valley at No. 13.

“The Rivermead Cup has history here in Canada, and if you’re not going to win the big trophy, the Rivermead Cup is a pretty good consolation prize,” said Hughes. “Twenty-one Canadians here this week and every one of those players are just so talented.

“But, yeah, next year will be additional pressure being so close to home. But, again, it’s only what you make of it, and if you just try to have fun with it, hopefully I’ll have a great weekend next year.”

Hamilton Golf and Country Club will host the 2019 RBC Canadian Open. It is also shifting forward in the PGA TOUR’s schedule, moving to early June in the week before the U.S. Open.

Chris Crisologo, a Team Canada member had a stellar showing in his PGA TOUR debut. The Richmond, B.C., native fired a four under 68 to finish as low amateur in the field at T45 – collecting the Gary Cowan Medal.