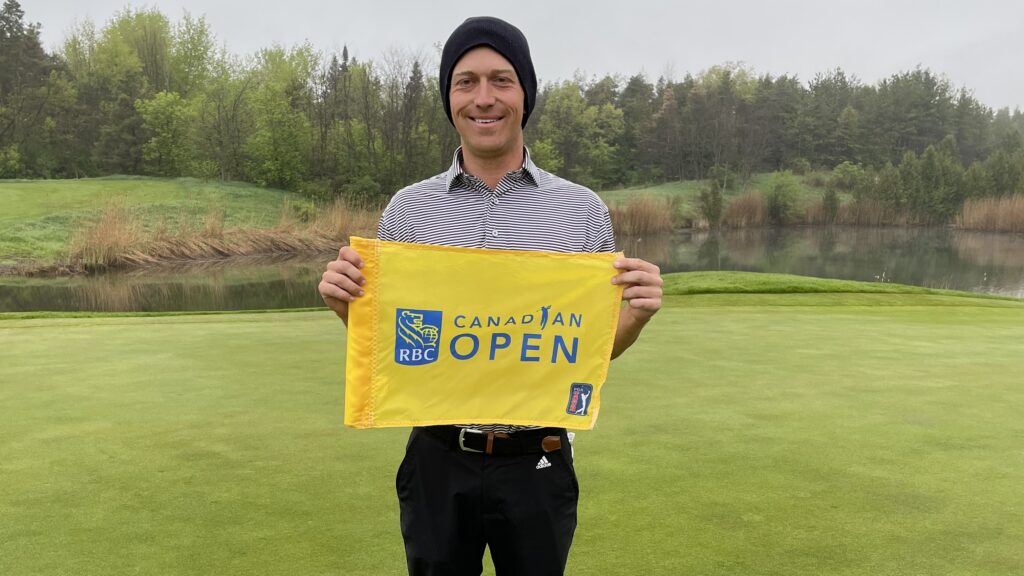 CALEDON, Ont. – Before the pandemic started, Brendan Leonard was ready to call it quits on golf. Missed cuts and failed attempts at Q-school and the Mackenzie Tour lead the 30-year-old to lean towards pursuing a career in teaching. Now, some two and a half years later, he finds himself preparing to play in the 2022 RBC Canadian Open.

A two-foot putt for par on the fourth playoff hole booked the Cambridge, Ont. native’s ticket to the RBC Canadian Open at St George’s Golf & Country Club on June 6-12, after a marathon-like battle with David Li Sheman.

Twenty others, excluding Li Sheman, also earned spots at the Final Qualifier on June 6 at Oakdale Golf and Country Club. Among the group are Michael Gonko, who finished at 5 under, and Ben MacLean, Chris Wilson, Phil Arci and Victor Ciesielski, who each carded rounds of 4-under-par 68.

A frost delay pushed back tee times on Wednesday morning and darkness suspended play in the evening, but 25 hours, 1 minute and 24 seconds after the originally planned start time, a champion was crowned at the RBC Canadian Open Regional Qualifier (Ontario) at TPC Toronto at Osprey Valley in Caledon, Ont.

A look back into the sunset, a nod and a handshake wrapped up play on Wednesday as the player’s agreed it was too dark to continue.

“It was nerve wracking waiting around, that’s probably the worst part,” said Leonard, whose alarm clock was set for 4 a.m. Thursday morning. “Going into today, I told myself, ‘You’re the best player in the field, let’s just try and get it done.”

Get it done, he did.

On Wednesday morning, the players returned to the tee on No. 18 and went toe-to-toe.

On the first playoff hole of the day – and third of the tournament – Li Sheman’s approach shot found the water, forcing the Aurora, Ont., native to drop. The penalty stroke did not seem to faze him, however, as he was able to regather himself and get up-and-down to save par.

On the ensuing playoff hole, it was Leonard’s composure that sealed the deal for him. A perfectly executed tee shot and layup left him with a short chip and a nervy two-foot putt for par to win, and he made no mistake. At first, a subtle fist pump and a sigh of relief was all the reaction to show for it, but there was no holding back the smile that lit up Leonard’s face moments later.

“I’ve been dreaming of this since I picked up a club at age 14,” he said. “I’ve always wanted to play in the [RBC] Canadian Open, so I’m happy to now have the chance to do it.”

Leonard’s patience has been tested, not only on Wednesday and Thursday this week, but everyday since the 30-year-old dedicated his life to golf. Safe to say now, the patience has paid off.

“I was kind of struggling [before the pandemic] but a few people told me to just keep going and I’ve played really well the past two years, so now I’m feeling pretty good about my game,” said Leonard.

“I get up, practice, play and go back and do the same thing seven days a week,” added Leonard, who is a PGA of Canada professional at Whistle Bear Golf Club in Cambridge, Ont.

Despite making consecutive birdies on hole Nos. 8, 9, 10 and 11, it wasn’t until a 45-foot putt for birdie on No. 16 that Leonard – who admittedly looked at the leaderboard prior to his round – thought he had a legitimate chance at winning the qualifier.

“I wanted to get to 7 under. Obviously, that didn’t happen, but I still got the job done,” he said. “I’ve had a few good years lately, but I think this one takes the cake,” added Leonard, alluding to Thursday’s win being the best moment in his golf career.

Leonard says he’s never played at St George’s Golf and Country Club before but plans on visiting before teeing it up the week of June 6-12. As for his goal for that week, it’s simple:

“Every tournament I play, I try to win, so I am going to take it hole-by-hole and try to birdie as many as I can.”

Leonard says he’s got many phone calls to make, but the first went out to his parents.

“They’re my biggest supporters; they’ve done a lot for me [and] helped me out a lot so they’re going to be pretty happy,” he laughed.

Despite being six days shy of his 31st birthday, Leonard plans on celebrating early.

“We’re going to have fun tonight,” he joked, with a wry smile.

The 18-hole qualifier at TPC Toronto was the third of four regional qualifiers taking place across the country. The fourth, and final, regional qualifier is scheduled for Monday, May 30at Mickelson National Golf Club in Calgary, Alta, rounding up the field for the Final Qualifier.

For past results of the 2022 regional qualifiers: Quebec and British Columbia